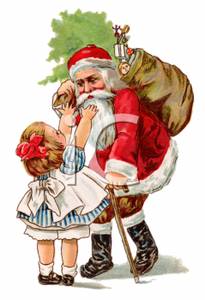 An article about the power of collective imagination

Perhaps the most compelling reason in factor of the existence of Santa Claus is to be found in the concept of egregore, though perhaps more tangibly in the Tibetan idea of the “tupor”. A tupor is essentially a thought form, which can assume a ghostlike and sometimes even physical reality by the concentrated efforts of a group of people. These thought forms can be powerful enough to influence the physical laws of nature.

In olden times, knights all created an egregore of a “hero” or a “princess” or an “angel” – they put much will power and thought into its creation. In battle many claim to have seen a manifestation of this egegore as a physical reality, hovering above the battlefield. Many felt strengthened by it. Armies and groups who gained victory over seemingly impossible odds, often had created “egregores” before going into battle.

In paranormal science, the egregore is a quasi-real being created by a group of people. Could Santa be such an egregore, created collectively over centuries by literally MILLIONS of people?

The legend of Santa Claus, which of course derives from the tale of Saint Nicholas and his generosity towards the poor, has been embellished by a range of commercial and literary forces over the centuries.

The idea of an egregore being a projection of thought force into the formative forces underlying matter, the breathing of will force into an imaginary-form-made-real – a being created of focused thought that can, under the right circumstances, literally materialise, is gaining currency even amongst some sceptics in the field of paranormal psychology.

It might be argued that several such tupors or egregores of Santa Claus (perhaps even thousands) have been created throughout the world. However the tendency towards globalisation, standardisation and ‘oneworldness’ suggests a convergence of these thought forms into possibly a single materialising entity, a being in a red-suit, who sometimes works directly, other times simply indirectly through inspiring acts of generosity in the people who give him attention.

Given that part of the thought form involves a certain element of ‘secrecy’ and mystery around the actual personage of Santa Claus, as well as the clear requirement for the being to be able to occupy many points in geographical space at the same time (delivering all of the presents in one night), it is unsurprising that the Santa Claus tupor is rarely physically glimpsed. We have created our own myth around it.

The tupor also extends to such other beings as reindeers and elves. Preposterous as this sounds it is entirely plausible that a combined thought force, manifesting in the collective will of a large yet significant minority of humanity, is, and has been creating a real manifestation of the memory embodied in the Saint Nicholas myth. Allied to a general wish to believe which in itself represents significant amounts of will power, it may also occur that the tupor manifests within the cognitive activity of human beings – in a way a kind of self directed thought form – increasing the level of general good will within in which the tupor has been invested.

Thus even an ardent unbeliever in terms of the reality of physically manifesting thought forms, may personally manifest Santa Claus like behaviour including generosity, good humour, and the wish to make the impossible come true for friends and family at Christmas time. This may also at least partly explain why even ardent atheists will literally’ enter into the spirit’ of Christmas, even going so far as to dress up as Santa Claus and say “ho, ho, ho.”